I think the Nuremberg trials are a black page in the history of the world…I discussed the legality of these trials with some of the lawyers and some of the judges who participated therein. They did not attempt to justify their action on any legal ground, but rested their position on the fact that in their opinion, the parties convicted were guilty…

This action is contrary to the fundamental laws under which this country has lived for many hundreds of years, and I think cannot be justified by any line of reasoning. I think the Israeli trial of Adolf Eichmann is exactly in the same category as the Nuremberg trials. As a lawyer, it has always been my view that a crime must be defined before you can be guilty of committing it. That has not occurred in either of the trials I refer to herein.

The following is an extract from the article The Greatest Holocaust Trial: Using Adolf Eichmann To Falsify History

“This trial, whose main objective was bringing a Nazi who helped organize and carry out genocide to justice, transformed Jewish life and society as much as it passed judgment on a murderer.” Deborah Lipstadt

“The Eichmann trial…remains the Great Holocaust Trial—the legal proceeding in which the tasks of doing justice to unprecedented crimes, clarifying a tortured history, and defining the terms of collective memory conjoined and collided in the most provocative fashion. Indeed, the Eichmann trial served to create the Holocaust…” Law professor Lawrence Douglas

As in the Nuremberg trials, almost all of the available documents were controlled by the prosecutors. The defense team [was] comprised of Dr. Robert Servatius and his assistant, Dieter Wechtenbruch.  The Israeli Mossad also spied on Dr. Robert Servatius constantly, and all of his consultations with Eichmann were monitored. This made it virtually impossible for the defense to spring any surprises during the trial.

Gideon Hausner called numerous witnesses who had no connection with Adolf Eichmann. While much of this testimony was based on hearsay, the Jewish eyewitnesses transformed the trial from an important war-crimes trial to one that would have enduring significance.

Dr. Servatius knew under the trial conditions in Israel he could not contest the Holocaust story.  Servatius, who was supposed to be defending Eichmann, was also fully aware that he could not garner sympathy for his client by aggressively challenging the Jewish eyewitnesses. Servatius thus decided to conduct almost no cross-examinations of the prosecution witnesses.

On December 11, 1961, the presiding judge in Eichmann’s trial handed down the death sentence. Adolf Eichmann was hanged six months later. Eichmann’s execution was the first in Israel’s history.

President Dwight D. Eisenhower’s irrational hatred of German’s is evidenced by the deliberate starvation of hundreds of thousands of German POWs after WWII as discussed here and here. This was made possible by the relentless and vicious propaganda manufactured by the Allies after Germany’s defeat.

From the article How Many Genocides Can Germany Survive? Genocide Of The German People – Part 2:

Friedrich Grimm, a renowned German authority on international law, was shown samples of new leaflets printed soon after the war in German to be distributed by the Allies throughout Germany. Describing German war crimes, the leaflets were the first step in the reeducation program designed for Germany. Grimm suggested to an Allied officer that since the war was over, it was time to stop the libel. The Allied officer replied:

Why no, we’re just getting started. We’ll continue this atrocity campaign, we’ll increase it till no one will want to hear a good word about the Germans anymore, till whatever sympathy there is for you in other countries is completely destroyed, and until the Germans themselves become so mixed up they won’t know what they’re doing![1]

Guilt pervades Germany today as a result of the Allied propaganda campaign. It is now all but forgotten that even Eisenhower’s own son encountered a population used to the good behavior of the German occupation troops during WWII. 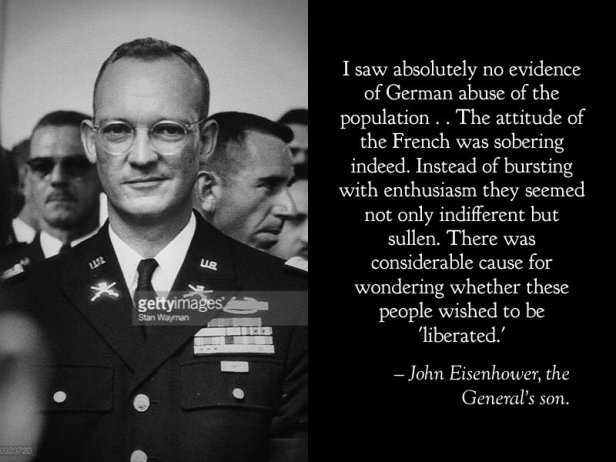